You are here: Products Makin’ Biscuits: Weird Cat Habits and the Even Weirder Habits of the Humans Who Love Them 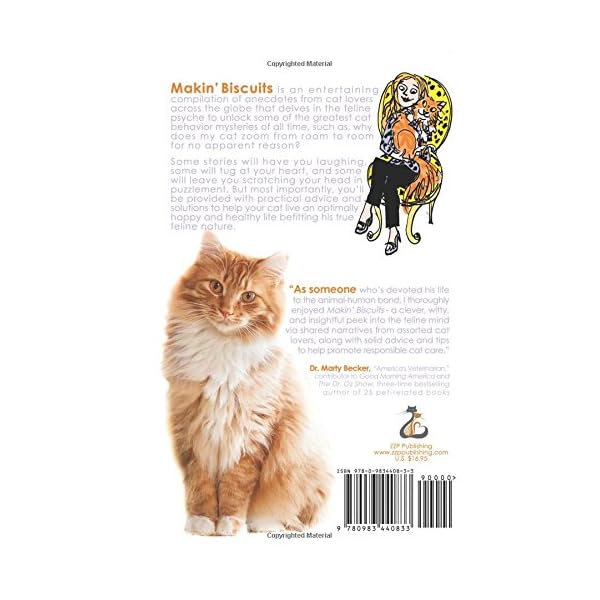 Makin’ Biscuits: Weird Cat Habits and the Even Weirder Habits of the Humans Who Love Them

Product prices and availability are accurate as of the date/time indicated and are subject to change. Any price and availability information displayed on [relevant Amazon Site(s), as applicable] at the time of purchase will apply to the purchase of this product.

“In Makin’ Biscuits, Deborah Barnes uses humor to deliver a seriousmessage about responsible pet ownership. With anecdotes from cat lovers, aswell as experience with her own cats, Barnes gives us a whimsical, candid lookat life with cats plus tips, suggestions and references to help keep themhappy. Written in a conversational style, she shares funny, eccentric and oftentouching tales of cats and their people. My favorite anecdote is the storyabout an owner who “time-shared” Tux the cat with loving neighbors for eightyears. Read on to find yours!”
~Ramona D.Marek,MS Ed., author, Cats for the GENIUS

Makin’ Biscuits wasn’t even a thought in my mind until I got out of the shower one morning andwrapped my wet hair with a towel. I felt something land on top of my head -it was my otherwise shy cat, Mia, who decided that was the perfect spot tonap. I was accustomed to my cats doing odd things (I have seven of them),but this was odd, even for my standards, so I decidedto pursue the concept of a book.

I issued an open call on my award-winning blog, Zee& Zoey’s Cat Chronicles, asking readers to share some of the weirdthings their cats had done and the comments poured in. I heard from catlovers of every lifestyle, sex, age, and occupation – bloggers, authors,celebrities, musicians, behaviorists, and more – all opened up to share some of theeccentricities of their feline friends. Like Vanna White, hostess of Wheel of Fortune, whose cat, Stella, isfascinated with opening closed doors, or blogger Sandra MacGregor of hairballsandhissyfits.com who wasconvinced she had a burglar in her house when she heard a loud thumping noisein the middle of the night – it was her cat, Amarula, carrying one of herwinter boots up the steps!

Finding behavioral patterns in the submissions,I put them together in like-minded chapters, such as “You Can Pet Me,Just Don’t Touch Me,” in which I discuss the tendency some cats haveof not wanting to be held or touched, even though they otherwise enjoy attention.Each chapter begins by me narrating a story about my cats, segues to”Mews From Others” where I shares anecdotes from other cat lovers, andends with a “Purr Points to Ponder” section of information, advice, andtips to help cat guardians provide their cats with an optimally enriched environmentbefitting their instinctual nature.

While Makin’ Biscuits is an entertaining read, thebook actually has a serious message – to dispel certain negative myths andstereotypes about cats; to make a difference in cat welfare by helping toenhance the feline-human bond; and to enlighten readers on certain subjects,such as the need for spay/neuter to help reduce the staggering numbers of catsin shelters, as well as to provide resources, tips, and advice to correctcommon behavioral problems that can land a cat into a shelter, such as litterbox issues. It is my hope to see it one day in all veterinarians’ offices,rescues, and cat-parent’s hands across the country.

From the Inside Flap

To my sweet Mia – the cat who started it all when she decided napping on my toweled head after I got out of the shower was our normal – and to my equally sweet Jazmine whose passion for biscuit making inspired the rest to follow.

From the Back Cover

“As someone who’s devoted his life to the animal-human bond, I thoroughly enjoyed Makin’ Biscuits – a clever, witty, and insightful peek into the feline mind via shared narratives from real-life cat lovers along with solid advice and tips to promote responsible cat care.”
Dr. Marty Becker, “America’s Veterinarian,” contributor to Good Morning America and The Dr. Oz Show, three-time bestselling author of 25 pet-related books.

Deborah Barnes resides in South Florida with her fiance and feline family of seven – Zee, Zoey, Mia, Peanut, Rolz, Kizmet, and Jazmine. She is the author of Makin’ Biscuits – Weird Cat Habits and the Even Weirder Habits of the Humans Who Love Them, as well as Purr Prints of the Heart – A Cat’s Tale of Life, Death, and Beyond, and The Chronicles of Zee & Zoey – A Journey of the Extraordinarily Ordinary.

She is also the author and editor of the award winning cat-related blog, Zee & Zoey’s Cat Chronicles, and is the Vice President of the Cat Writers’ Association. She was awarded 2013 “Writer of the Year” by Friskies Purina and her book, Makin’ Biscuits was awarded the President’s Award and the Human-Animal Bond Award in 2017 by the Cat Writers’ Association. She was honored with the Adopt-a-Shelter Cat Award in 2016 from Adopt-a-Shelter.com for her article “Any Cat Can be a Feral Cat, Even Yours” and is the Secretary of the nonprofit, Pawsitively Humane, Inc. of Miami, Florida. Her freelance work has been featured in Cat Fancy magazine, Kittens 101, Catster.com, and the American Association of Human-Animal Bond Veterinarians.

This website uses cookies to improve your experience while you navigate through the website. Out of these, the cookies that are categorized as necessary are stored on your browser as they are essential for the working of basic functionalities of the website. We also use third-party cookies that help us analyze and understand how you use this website. These cookies will be stored in your browser only with your consent. You also have the option to opt-out of these cookies. But opting out of some of these cookies may affect your browsing experience.
Necessary Always Enabled
Necessary cookies are absolutely essential for the website to function properly. This category only includes cookies that ensures basic functionalities and security features of the website. These cookies do not store any personal information.
Non-necessary
Any cookies that may not be particularly necessary for the website to function and is used specifically to collect user personal data via analytics, ads, other embedded contents are termed as non-necessary cookies. It is mandatory to procure user consent prior to running these cookies on your website.
SAVE & ACCEPT